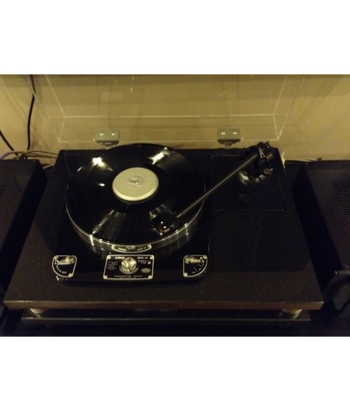 The following review is from a customer that bought the SMD Acoustics 301 platter and bearing complete with spindle upgrade.

Arrived back in Malaysia last night having been on the road for 24 hours but just had to fit the bearing and platter. Thought I'd play a couple of tracks before going to bed ...... Well more like 20! As I mentioned previously I sorted out the earth hum and there was no doubt that the deck was quieter and allowed the gain to be stepped up. Now remember I'm still using a 0.18 Volt, 350 cartridge.
So I thought I'd just listen to a couple of tracks on the newly remastered Led Zeppelin III. Now everyone says Page has done magic with the remastering but I was in no way prepared for what I heard. Of course I was quickly pulling other albums out and just could not believe what I was hearing. Make no mistake I have been happy with the deck's performance, hum apart since I bought it.
To say the bearing/spindle and or platter upgrade has been an improvement is just about the biggest under statement imaginable. . . . . .
I read your website comments about what to expect but I was simply not expecting this. Not only is the bass far smoother and controlled but the entire spatial arrangement of instrument and voices is better defined. Decay is improved and attack and dynamics are incredible, areas I felt digital often did better on.
Now as mentioned the Denon is no power house but I can play the system at far higher volumes with no muddling, or compression. It's truly startling! Snare and high hat are crisp and clear. Two albums that I particularly enjoy are Yes's Fragile and Jethro Tull's Aqualung. Both of these, even in recent issues I still felt suffered from a bit of compression. Well not anymore . . . . .
So apart from a lovely controlled bass, a beautiful natural detailed mid range and a lovely crisp top end which sounds so much more "musical" can I hear more detail in recordings? Indeed I can and it's significant.
I have probably spent 3 plus hours this evening and the deck just effortlessly cuts through albums like a hot knife through butter - all of the above and not the least bit tiring.
I was simply knocked out when I first heard JL subs in a hi-fi system- the total system cost would buy you an Aston Martin Rapide. Now I only have the one but it fits the active Linns like a glove but on vinyl I could never push the volume like digital sources. Not that I would want to but I can shake doors and have bass coming through the floors with nothing that approaches distortion - it is just lovely loud, controlled bass.
I really hope that every Garrard owner upgrades their turntables in this manner. I bet if the boys in Swindon had designed this upgrade they'd be jumping for joy and there would have been rave reviews for years.