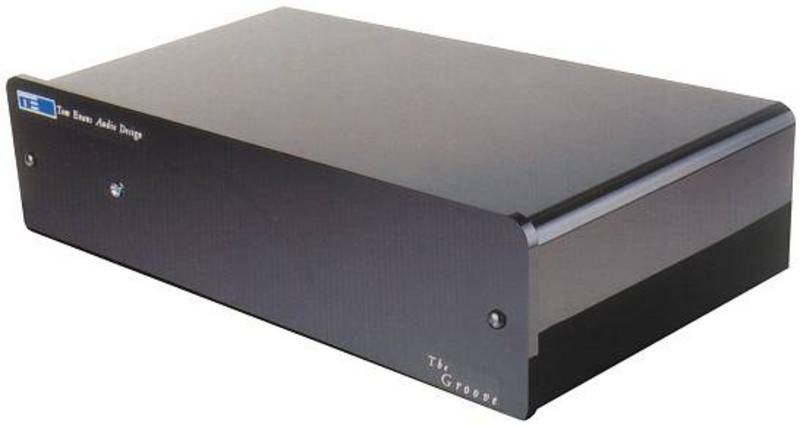 The Groove RIAA stage is the result of over 10 years R&D into disk replay. In developing the Eikos CD player, Tom argued that as long as the voltage regulators supplying the board were noisier than the quietest passages recorded, and their transient response time was slower than the devices were capable of, there was no point in improving the circuit topology until these fundamental problems were solved. Two years later, he had developed the Lithos voltage regulator, a milestone in musical reproduction. The device is 53 times faster, 1000 times quieter, and 5 decimal places more accurate than the previously 'best' regulators available. Thus was laid the foundation for The Groove phono stage.

The Groove is a dual mono design using one Lithos 7 regulator per side to supply power to each mono signal path p.c.b. The regulators are powered by a dual mmono mains power supply. Channel separation is therefore limited only by the specifications of the cartridge used. All resistors are Holco precision metal film. At the front end, Tom has used very low noise I/Cs (less noise than a 50-Ohm resistor). This stage is followed by a passive RIAA EQ circuit. The third stage is an ultra linear gain amp; around this he has placed the active lower frequency filter to roll off subsonics. The fourth stage is the output stage, which is capable of driving several meters of interconnect.

The case, if made of any metal other than copper, would have a deleterious effect on the sound quality, as field effects of even non-ferrous materials interfere with electron flow. For this reason, the casework is of Perspex, a material with no inductive capacity.

Since its launch in the UK, it has become the industry standard. The Groove can be upgraded to the Plus spec.

The Groove+ SRX makes available the option of user adjustable resistive and capacitive loading. The circuit board incorporating the banks of dip switches for 9 different resistive and 5 different capacitive loads is external t the signal path. The SRX also includes new front end circuitry (the SR stands for SUPER RESOLUTION) that drops noise and distortion by over 50% Roy Gregory says "Swapping from the Groove + to the SRX, the first thing you'll notice is the dramatic increase in sheer substance and colour...What the SRX upgrades do for the Groove is place it firmly back at the top table of vinyl replay. It is also, and by some distance, the most affordable of the various options I see seated there."

Note: Once ordered delivery will be approximately 3 weeks as unit is built to order.