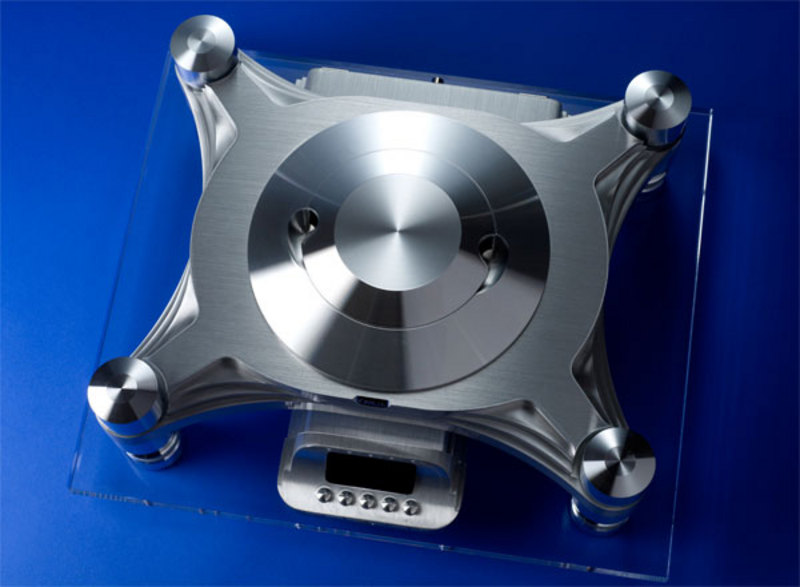 Oracle analogue and digital products have always been designed and built as "musical instruments" that can stand the test of time. It is our belief that achieving simplicity in design is a combination of knowledge and common sense. A properly designed device creates its own form; one that reflects the beauty of its function. True artistry combines these elements by means of the whole being greater than the sum of its parts.

Many of the problems that affect the accurate reproduction of recorded music derive from unwanted internal or external vibration. To address this issue the CD 2000 MkIII and CD 2500 Mk IV use a massive aluminum floating chassis and a Delrin decoupling system of the cd drive. Furthermore, our unique suspension and disc clamping systems originally used in our analog turntables, have been adapted for use in our "State of the Art" CD Players.

The CD 2500 Mk IV harbors a new DAC board that uses the BurrBrown PCM1792 wich allows input and output of digital data of up to 24bits/192khz. The CD player uses four independant and fully discrete analog modules, one for each of the analog signals from the PCM1792.

These analog modules wich have been further improoved from previous versions are at the center of the music reproduction quality. The CD 2500 Mk IV can be used as your reference DAC for other digital sources since it features a SPDIF digital signal input. Both the CD 2000 MkIII and CD 2500 Mk IV have had their power supply stage totally redesigned. There is better realism, more dynamics and we are closer to a true analog-like sound than ever!

Because the CD vibrates slightly due to the high rotational spin speed of the CD mechanism this vibration problem or "chatter problem" had to be addressed. Oracle Audio created an interface system that effectively controls this unwanted vibration through an innovative combination of materials and their interaction.

Chatter is a persistent feature of the compact disc, and it causes a major problem. The chatter or wobble of the disc causes the laser to lack focal clarity which results in distortion or misread information. This in turn causes the error correction circuitry to have to operate and sometimes to excess.

Oracle pioneered the now well established record clamp system to solve problems with analogue records back in 1979. A similar system has been developed by Oracle to combat CD chatter. Our Disc clamp acts to eliminate the chatter by magnetism coupled with a slight vacuum created by a thick Urethane washer; together these two effects solved the problems.

In order to achieve an impeccable natural finish on most of the machined parts, diamond cutting tools are used extensively. Each aluminium component is hand brushed and coated with a high gloss polyester lacquer to seal and preserve the beautiful natural appearance.

At Oracle Audio Technologies, people make the difference in manufacturing, they are craftsmen devoted to serving our customers. Their work creates pride of ownership; their passion for detail shows at every step of the manufacturing process. Their manufacturing techniques and skills result in a work of art.

The floating chassis plays an important role within the CD 2500 and CD 2000., It must rigidly support both the mechanism and the adjacent electronics. Its maximum rigidity, its minimal surface area and energy control are key its design parameters. The floating chassis system as a whole, due to its high mass, contributes in effectively controlling vibrations with the aid of additional mechanical filters. The chassis’s nylon sleeve whithin the Cd enclosure eliminates the high frequencies, the Delrin drive decoupling pillars remove medium and high frequency interferences from the vicinity of the drive mechanism. Finally, a Urethane compound acts as a mechanical energy trap reducing any remaining vibration to an insignificant level.

Because the world around a CD player vibrates, the mechanism must be isolated from it. Oracle’s suspension system has proved to be virtually the very best in the industry.

The Oracle CD 2500'S and CD 2000's floating chassis assembly is suspended and isolated from room vibrations using four suspension towers. Each suspension tower assembly combines no less than 12 different components on both the CD Drive/Player. The suspension system is a highly sophisticated device combining 7 different mechanical filters all working as a whole to effectively control unwanted vibrations.

Digital Input : Plays any high resolution audio format, including 24/192 WAV native files and any PCM studio master with no compression or downgrade resolution to let them work.

Upon receipt of your order delivery will be approximately 4 - 6 weeks.

All prices include VAT at 20%