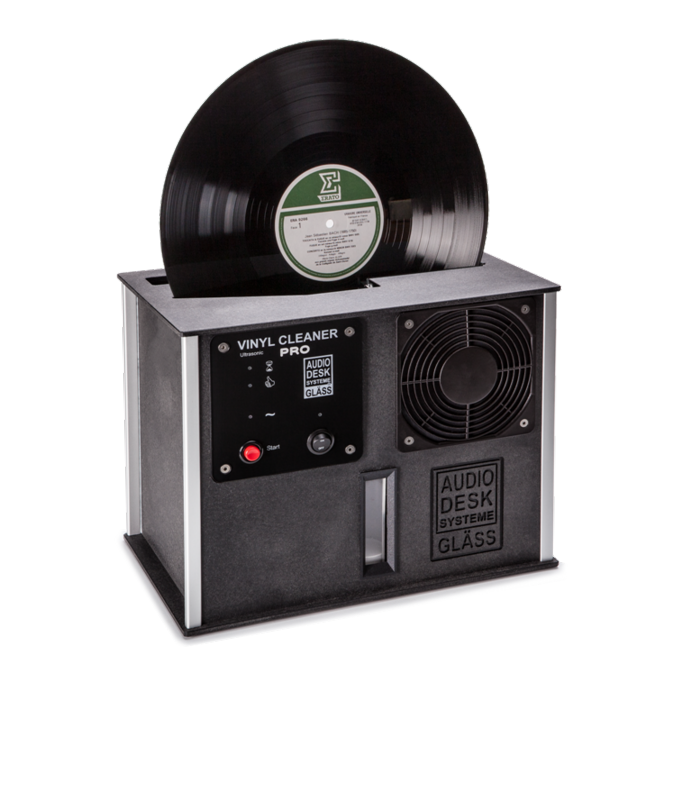 This service is for batches of 5 records at a time we charge £3.50 per record x 5 records i.e. £17.50 plus return postage of £7.50. Please contact us if your quanites differ we can ajust postage costs accoringly.

This process involves a gentle wet wash and at the same time penetrating ultrasonics dislodge microscopic particles deep in the grooves of the records, only ultrasonics can do this.

After cleaning the record is gently dried by the machine leaving the surface pristine and clean prior to being placed in a brand new high quality anti static sleeve.

Why is it so important to clean my records?

The grooves of an uncleaned record have the presence of dust, grit and particles from the stylus tip itself not only can this damage records and reduce stylus life, but may affect tonal response. An analysis by Shure of the "dust" removed from a number of stylus tips, which had been used on dirty records, showed that it consisted of approximately; 12% jagged silica particles, 35% diamond dust, 40% miscellaneous particles, including soot, grit and particles worn from the record groove itself. The remaining 13% consisted of fibers and lint.

The stylus tip could not, of course, remove particles which had already become embedded in the groove walls. From the analysis, it can see that almost 65% of the extraneous material is harder than the comparatively soft record material and, therefore, is capable of scratching and damaging it. This material in the record grooves also increases the amount of friction between the stylus and the record groove as we have found.

Dust was mentioned among the factors contributing to excessive record and stylus wear. Dust and grit in the record grooves were found to be the primary cause of exceptional wear found in the tested styli. These findings led to an additional series of tests on styli to determine to what extent dirt and grit lodged in the record grooves affected record and stylus life. Brand new records were used to create wear on one group of styli. A second group was worn with used records. A third group of styli were then worn with clean used records, and a fourth group with used records which had not been cleaned.

Tests showed that both airborne dust and debris worn from the stylus tip itself are the greatest cause of excessive record and stylus wear. Complete removal of dust and grit from the record grooves resulted in increases of up to 60% in the useful life of both records and styli.

When Shure originally published this article record cleaning was not as advanced as it is today with the Audio Desk Systeme Vinyl Cleaner and many people used and still use a record pad to clean records, unfortunately a record pad can actually damage records by scratching them and grinding microscopic particles of dust and grit into the grooves. In addition to causing excessive wear of records and styli, these dust particles also increase the noise level of the record. Since the particles of dust and grit are often as large as the recorded impressions in the record groove which create the sound, they will affect the stylus movement, causing random impulses which are translated as noise. This increase in noise level due to dust and grit is the biggest contributing factor to the hissing sound commonly and mistakenly referred to as "needle scratch."

Why is the service we offer with ultrasonics better?

Completely removing dust and grit from a record is not a simple problem. A number of factors must be considered. Firstly, the cleaner must not contain any gummy substance that will remain in the engraved depressions in the record groove. Secondly, the cleaner must completely penetrate these same depressions and remove any dust or grit they may contain. Thirdly, the cleaner must not affect the record material itself in any manner. Record dust/dirt when examined under a microscope consists of grease, stylus particles, abrasive material, and solids which resemble wool fibers covered with a soft waxy substance.

The Audio Desk Systeme Vinyl Cleaner addresses all these problems and leaves your records in pristine condition.

WE ALSO RECOMMEND OUR STYLUS EXAMINATION IN CONJUNCTION WITH THIS SERVICE

Even new records benefit from cleaning (they contain release agent)

Records will be returned using a courier service with basic transit cover of £25 please get a quote from us if you require enhanced insurance.

Dirt and grime effectively removed obviously scratches can not be removed.