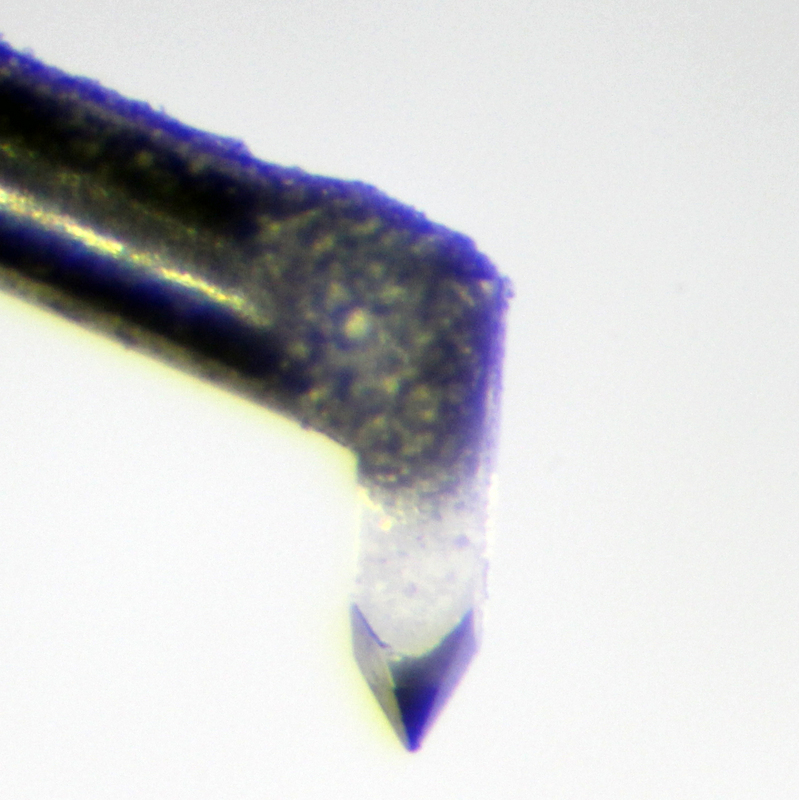 Nowadays few companies can offer such a service and unfortunately there are still some "professionals" that believe it is possible to see stylus wear under a hand held 10x magnifier (it's not). Peak HiFi are an Ortofon appointed centre of excellence and have many years of experience with cartridge and stylus from many fine manufacturers including Ortofon, Dynavector, Koetsu etc.

We use only the finest equipment from Leica and Canon to inspect styli and cartridges and with each inspection we provide a technical report (see downloads below for an example).  We use the recognised method of oblique lighting techniques to observe "cats eyes" and evaluate stylus wear.

HOW, WHERE AND WHY DOES A STYLUS WEAR?

The stylus tip, when in good condition, touches the groove walls at only two points see image below (source thevinylengine.com).

The entire weight of the stylus and the structure which holds it is concentrated at these two microscopically small points. The cartridge maker Shure calculated the concentration of pressure upon the points to be approximately 26 tons per square inch (will vary based on tracking force). The walls of the record grooves are, of course, subject to the same pressure, but only for the fraction of a second required for a particular section to move past the tip as the record rotates. The stylus tip must travel well over one-half mile of surface each time a 12" LP record is played...with 26 tons of pressure per square inch. It is not surprising that the stylus tip wears out, despite the fact that the material of which it is made is harder than the record material.

The stylus tip follows the impressions engraved upon the walls of the record groove. These impressions, depending upon the pitch of the recorded sound, force the stylus tip to vibrate from side to side as fast as 10,000 times per second. The stylus tip in the record groove follows a path in much the same manner as car tyres would follow the ruts in a country road. As the stylus tip touches the groove walls at only two microscopically small points the friction causes the gradual wearing away of the stylus material at these points, and creates what are called "flats". The amount and degree of wear are apparent when the tip is viewed using a microscope and the correct techniques. It is these flats on the stylus tip which are the direct cause of increased record wear, distortion, and reduced tonal range. Although these flats appear on both sides of the stylus tip, the amount of wear is not the same on both sides because of the side thrust created by the tone arm mounting method. This can be off-set somewhat by proper setting of the anti-skate force. The amount of record damage, distortion, and the reduction of tonal range due to worn styli increases in direct proportion to the size of the flats on the stylus tip. Depending on the wear, the stylus tip can become a cutting tool, and if continued in use, it will eventually take the shape of a miniature chisel. Thus, when it is forced from side to side, it will cut and gouge minute particles from the groove walls as it travels. This cutting and gouging of wave crests is one form of record wear. The wearing process is also hastened by the abrasive action of dust in the grooves. The wear on both the stylus and the record groove can be considerable.

HOW LONG SHOULD A STYLUS LAST?

A worn stylus damages records, causes distortion, and affects tonal response. What, then, is the life of a phonograph stylus, and when should it be replaced? The first part of this question is rather difficult to answer with any degree of exactitude. Asking, "how long should a stylus last?" is like asking "what is the life of a car tyre?" To answer such a question, even approximately, would require additional information, such as: the weight of the car; the speed at which it is usually operated; the type of roads over which it will travel; whether gravel, dirt, or asphalt; the quality of the tire itself, etc. Quite a number of variable factors! The life of a pickup stylus depends upon at least as many variables. Among the factors influencing stylus wear are the material of which the stylus tip is made; the condition of the records with which it is used; and the stylus pressure. Also of considerable importance is the ability of the pickup itself to follow the impressions engraved upon the groove walls with the least resistance to the motion they cause. This is called "track-ability" and is related to a specification called "compliance."

As a rule of thumb, a diamond stylus should play circa 800- 1000 hours without significant degradation in performance. After 1000 hours the profile will start to exhibit changes but the useful stylus life should be up to 1500 - 2000 hours. We strongly recommend a full stylus check around the 1000 hours mark.   For the cost of an LP we can help protect your record collection and stylus.

SHOULD I CLEAN MY RECORDS?

SHURE found through their research that dust and grit in the record grooves were the primary cause of exceptional wear found in the tested styli.

The presence of dust, grit and particles worn from the stylus tip itself not only can damage records and reduce stylus life, but may affect tonal response. An analysis of the "dust" removed from a number of stylus tips, which had been used on dirty records, showed that it consisted of approximately; 12% jagged silica particles, 35% diamond dust, 40% miscellaneous particles, including soot, grit and particles worn from the record groove itself. The remaining 13% consisted of fibres and lint.

Below: A top of the range record cleaning machine from Audio Desk Systeme. This machine uses ultrasonics to remove damaging dust and grit from the grooves of the record. The stylus tip could not, of course, remove particles which had already become embedded in the groove walls. From the analysis it was established  that almost 65% of the extraneous material is harder than the comparatively soft record material and, therefore, is capable of scratching and damaging it.

When the average person bothers to clean records it is usually done with a slightly damp cloth on the assumption that the cloth will pick up the dust and the dampness will eliminate the electrostatic charge. This method of cleaning does accomplish these functions to some extent. What actually does occur is that the cloth picks up some of the dust and grit. The remainder, however, is ground into the grooves by the rubbing action. The dampness of the cloth does reduce the electrostatic charge, but only temporarily, since it quickly builds up again as the record dries. However any attempt to clean records is commendable and even a poor cleaning is better than none.

Completely removing dust and grit from a record is not a simple problem. A number of factors must be considered. Firstly, the cleaner must not contain any gummy substance that will remain in the engraved depressions in the record groove. Secondly, the cleaner must completely penetrate these same depressions and remove any dust or grit they may contain. Thirdly, the cleaner must not affect the record material itself in any manner. Record dust/dirt when examined under a microscope consists of grease, stylus particles, abrasive material, and solids which resemble wool fibres covered with a soft waxy substance.

Clean grooves result in greatly reduced record and stylus wear but the only way to do this effectively is with a high quality record cleaning machine. When you consider the average record costs £20 so the enthusiast with 1000 records has a £20,000 investment. This puts the cost of a record cleaning machine into perspective starting at £299 for an entry level machine to just over £2000 for the best money can buy.

WHAT ELSE CAN I DO TO PROTECT MY STYLUS AND RECORDS?

We realise sometime a stylus/cartridge may suffer damage prior to it wearing out so in addition to the technical report we can also include a quotation for insurance purposes should your stylus have been accidentally damaged (the cost of the report is refundable if you buy a replacement from us).

We acknowledge Shure's published articles on the subject of stylus wear and have used abridged text from this source .